DC Statehood Activities
1. Call the President!
The voters of DC did their part in electing a president that represents our interests. Now it is Biden’s turn to represent us! The White House Call-in Line is back up (the previous administration had shut it down). Take advantage of this opportunity to tell President Biden to use all the powers of the Presidency to make sure DC Statehood passes Congress.
The line is staffed Tues-Thurs 11am-3pm ET
202-456-1111

President Biden HAS done more for Statehood than any other President. But that’s not enough. Now is our best chance to become the 51st state and President Biden must be a driver. Encourage your networks and your friends and family to call and give the White House a first-hand experience of our passion.
You can forward to your networks/friends/family, anyone can call. We need full support from everyone all over the US. this isn’t just a DC issue; it is an attack on democracy. Everyone can take a stand.
2. Join the ‘Freedom to Vote Relay and Rally’ October 23rd
Plan to be part of the DC action on October 23rd when the relay organized by national organizations arrives here. It is critical that Statehood supporters be visible, organized, and show we must keep Statehood in the voting rights narrative.
The Freedom to Vote Act, the John Lewis Voting Rights Advancement Act and D.C. Statehood will stop threats to the freedom to vote and make sure that our democracy is open and accessible to everyone.
The national voting rights groups are mobilizing in a new and powerful way, joining together to walk and bike from West Virginia to our nation’s capital, DC on the week of October 16th, and to rally in DC when we arrive on Sat. Oct 23rd. If you can’t join the mobilization, there are other ways that you can take action now!
Sign up here to get involved here.
3. Show up for actions at the White House, next one is Oct. 5th
The Declaration for American Democracy, the League of Women Voters, and People For the American Way invites partners to plug into a series of planned civil disobedience events at the White House to put increasing pressure on President Biden to call on the Senate to do whatever is necessary to protect the right to vote. These efforts will build on the momentum of an initial event that was held at the White House on August 24th that garnered significant media coverage, from a full segment on Rachel Maddow on MSNBC, to NPR, to a direct response at the White House press briefing the next day.
These regular actions will focus primarily on the Freedom to Vote Act and will also speak out for the John Lewis Voter Advance Act and the Washington DC Admission Act. Having Statehood advocates in the audience demonstrates our commitment. Plan to come and hold our signs high.
The next action is October 5th, likely at noon. If your group is committed to getting involved, can recruit people to attend and / or promote the events, fill out the partner interest form here.
4.League of Women Petition Delivery October 19
Stand by for details on a press conference when LWV, ACLU, and DC Vote deliver thousands of petitions to Senator Carper in favor of Statehood. 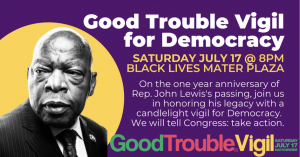 Located at Black Lives Matter Plaza in DC at 8pm on Saturday, July 17th, the one-year anniversary of the passing of Rep. John Lewis.

On March 7, 1965, when then-25-year-old activist John Lewis led over 600 marchers across the Edmund Pettus Bridge in Selma, Alabama and faced brutal attacks by oncoming state troopers, footage of the violence collectively shocked the nation and galvanized the fight against racial injustice.  This fight continues. Now we must galvanize the fight to protect the freedom to vote, to end the injustice of DC’s lack of statehood, to finally end Jim Crow voter suppression efforts.

National and local freedom to vote organizations and activits will honor his legacy with candles and music, hear from faith, youth and political leaders, and demand that Congress pass the For the People Act, the John Lewis Voting Rights Advancement Act, and D.C. Statehood.

Together, we will tell Congress – that the American people are showing up to demand a democracy for the people! Please show your support for DC Statehood and join us Saturday.

On January 4, 2021, Congresswoman Eleanor Holmes Norton introduced H.R.51-Washington DC Admission Act that would grant DC statehood.  The bill passed the House.  It is now in the Senate’s hands to decide if DC will become a state.  The next Senate briefing on this bill is June 22.  Join us on June 16th at 7:00pm for a Zoom call with Anne Anderson, Chair, League of Women’s Voters DC (LWVDC) Committee for Full Rights for DC Citizens to discuss what this means for the residents of DC as well as next steps.  Please share this link with anyone who wants to learn more about what it means to be the 51st state.  Click the link to get the Zoom information. No need to RSVP.  Just show up and show your support!  Now is the time to join the movement toward equality for DC residents. I personally look forward to seeing all of you on June 16.  WE NEED YOUR SUPPORT! Check back often to get updated information.

Click here to view the recorded DC Statehood briefing Zoom call that took place on June 16.  The password is #s^W.M!5

The For the People Act (S. 1) will be debated on the Senate floor next week (June 21-25), and the historic Senate Hearing on S. 51, the Washington DC Admission Act will be held on Tuesday, June 22 at 10 AM.  Energy for S. 1 and efforts for S. 51 will complement each other — critical to support both bills!

1)  Show up for Democracy and DC Statehood!  Tuesday, June 22nd from 8:30-9:30 – there will be a rally at 2nd St. NE and East Capitol, halfway between Union Station and Capitol South Metro stops.  Homemade signs preferred.  Suggested messages:  DC Statehood = Racial Justice, Statehood for the people of DC, …of ALL the people, by ALL the people, for ALL the people, etc.  Here’s a link to share with everyone you know:   Please share this far and wide. We need a BIG BIG BIG turnout.  https://www.facebook.com/events/318306496430318

2)  Take Photos: While you are there, please take pictures and tweet them with #picture51 and #DCStatehood.  Tag @lwvdc on your tweet too.  If you are not on Twitter, email your photos to president@lwvdc.org. If you are not able to go down to the event, and you are on Twitter, please retweet!

3)  Join the Virtual Watch Party:  Check www.showup4DC.com for watch party details and for any other updates on the Hearing and the rally for DC Statehood.

5) Please see the following message from Eleanor Holmes Norton’s Office with the most up to date information regarding the Senate hearing and who will be speaking:

Hearing will be Livestreamed Here